People have been queuing for hours at two pop-up stores run by a New Plymouth charity that redistributes surplus food to those in need.

On The House says demand has been so great it has been forced to bring in a lottery system to cut waiting times and reduce simmering tensions in the queue.

Started in 2017, On The House rescues unwanted food from cafes, bakeries, restaurants – and more recently supermarkets – that is destined for landfill or use as pig swill. 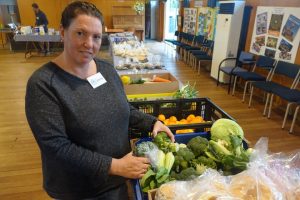 It used to operate out of a central city garage, but now runs a twice-a-week service from community centres in Strandon and Moturoa.

Coordinator Serena Brown said when the supermarkets came on board demand skyrocketed.

“We started seeing a lot more people lining up and starting to line up really early at about 3.30pm and we don’t open here until 5pm.

“So, we were quite concerned about people waiting for such an extended period of time especially coming into winter with the rain and the cold.

“We didn’t want people getting sick and having to wait outside just so that they’d be first in line basically.” 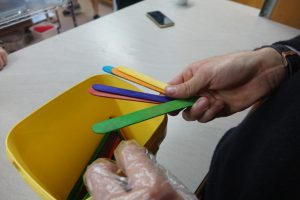 Brown said they now asked people to draw lots to get into the pop-up store.

“One of our trustees suggested the coloured iceblock stick idea and we’ve tried that for the last few weeks and it’s been working really well.

“Nobody has to turn up early, everybody’s got the same chance of getting in first, second or third and it’s become quite a game and I think people are having fun with it.”

Essentially, customers choose a coloured iceblock stick and a volunteer blind draws a stick from a container and those people with the same coloured stick can enter the pop-up store.

The stores have a range of food from eggs, dairy, frozen meat and fresh vegetables, to dry goods and bakery treats.

Typically there are about 100 customers who are welcome to take anything they like within certain limits.

Anything left over on the night is passed on to community groups who redistribute it through their networks.

Trustee Terry Hancock said On The House was meeting a hidden need.

“There’s a lot of isolated, marginalised people in our community who are stuck away behind doors that people don’t see, so we see them every week.

“That’s part of the reason On The House exists. It becomes a focal point, a place where people can meet and talk.

“And that’s from our volunteers right through to the people who use the service.” 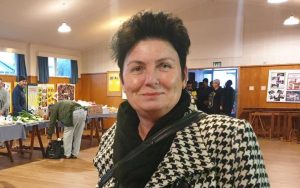 Eileen Donovan, who lived alone and was not working following an injury, said the service helped her make ends meet.

“Sometimes you just have some bills to pay and it’s just so helpful and generous, you know, to just donate food that was going to go to waste.

“And I just so appreciate it, You know when you get home you can stock your food up and pay your bills. It’s huge.” 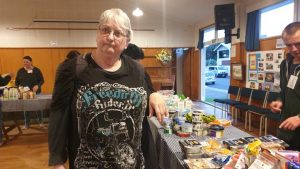 “If you are down on your luck and you need food and extra help that’s great and if you don’t but you want to support stuff not going to landfill, not going into the bin or to the pigs that’s great too.”

She was shopping on behalf of friends.

“It’s just not something they would ever think of doing, so I come after work collect this, take it home they pick up from me, but if there is any sushi – the sushi is mine. That’s the one proviso.”

Joyce was grateful for the helping hand.

“I’m actually in a little bit of a funk and I’m on an unemployment benefit which just sort of covers my living accommodation. It doesn’t cover anything else.

“I think without these people here and what they do for the community I don’t know where I’d be today, mate.”

Joyce said catching up with the wonderful volunteers was a highlight of her week. 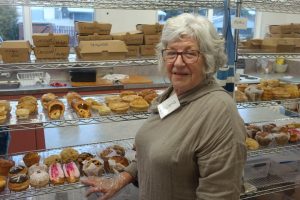 Which would be music to the ears of retiree Gloria Holland who was busy handing out pastries.

“Well I’ve always liked people. Worked with people. I love to talk to the people. Sometimes they share their stories which is always great. Sometimes sad, but that’s the way it is.

“So, I enjoy mixing with people and also seeing all this food saved of course.”

On The House is open between 5pm and 6pm on Tuesday at the St James Presbyterian Church community hall on Lawry Street in Moturoa and on Thursday at 10 Henui Street at the community hall next to the Holy Trinity Church in Strandon.